Let us just begin this review by stating the obvious: BTCProMiner.life is a scam, or rather, a sort of cloud-mining Ponzi scheme, the whole premise of which is unreal.

Why are we so certain that this is the case? Let’s elaborate.

This is a cloud mining site.

Let that sink in.

What that means is that its chances of being legitimate aren’t stellar from the get-go. This online vertical is plagued by massive scamming, prompting some experts to declare that almost all cloud mining operators are scammers.

The still worse news is that even if it were to be legitimate, it would still not be worth anyone’s time. Legitimate cloud-mining services seldom ever make ROI for their investors.

In btcprominer’s case though, there is no “threat” of legitimacy. The site is a genuine Ponzi scheme indeed.

What is the proposition/promise here?

Is it too good to be true?

It is indeed the very definition of that.

BTCProMiner clients can create free accounts at the site, and begin “mining” BTC for free…they can of course upgrade their accounts for a small (or large) fee, to secure additional benefits.

The free version of the setup comes with profits of 40 Satoshi per minute and 0.0006 BTC per day.

Yes, you read that right: you are essentially getting all this for free.

The most basic upgraded version costs 0.01 BTC, it raises the daily profit rate to 0.0012 BTC and it introduces the affiliate scheme. This program is essentially the heart and soul of the Ponzi scheme, because this is what it relies on to bring new customers into the fold.

The affiliate revenue rate is 20% of the upgrade money that referred clients spend at the site.

Further upgrade packages raise this rate to 30%, 40% and 50% respectively.

If you happen to have 7 BTCs though, just hold on to them and wait for the price to rise.

Don’t even think about “investing” them with these guys.

By taking a closer look at this limited upgrade package, the unlikely nature of the offer becomes obvious in a heartbeat: if offers a daily revenue rate of 2BTCs, which means that in 3.5 days, you would have your investment recovered, after which in a couple of weeks’ time, you’d be well on your way to putting these guys out of business.

The math doesn’t add up with the other upgrade packages either.

Thus far, two of two scam red flags are triggered: the site deals in cloud mining and its sales pitch is based on a too-good-to-be-true offer.

Who exactly is behind this operation though?

While the site does not have a proper About Us section, there’s some information available on the Contact page.

The company behind the site is apparently BTCProMiner Cloud EU LTD.

A search on the company name will reveal that it does indeed exist and that it’s registered under company number: 09951039, with offices in London, at 20-22 Wenlock Road.

The only CEO of the operation is an Italian gentleman named Giacomo Bugini, who is pictured standing in front of a few racks full of ASICS.

What exactly is wrong with this whole corporate profile though?

Bugini has apparently been associated with a number of other unsavory operations too, like ADVgeneration, which turned out to be a Ponzi scheme (no surprises there), eurobitmarket, a defunct exchange, bitcoinbay.co (also apparently defunct) and others.

Bugini is apparently also responsible for Bitminer – another cloud-mining scam.

He apparently founds companies left and right and uses them to set up various online Ponzi schemes and scams.

To call this corporate background suspicious would probably be the understatement of the year.

If knowing all this, you still decide to trust your money to this Bugini character, you probably do indeed deserve what’s coming to you.

The website itself, btcprominer.life, is not particularly trust-inspiring either.

While it’s light on sales copy, it features a very dubious “proof” page, which offers information on some transactions as well as bitaps verification.

It is important to remember though that Ponzi schemes may in fact pay some of their victims during their early stages, and all signs seem to point to the fact that btcprominer.life is indeed in the early stages of what’s likely to be a brief existence. 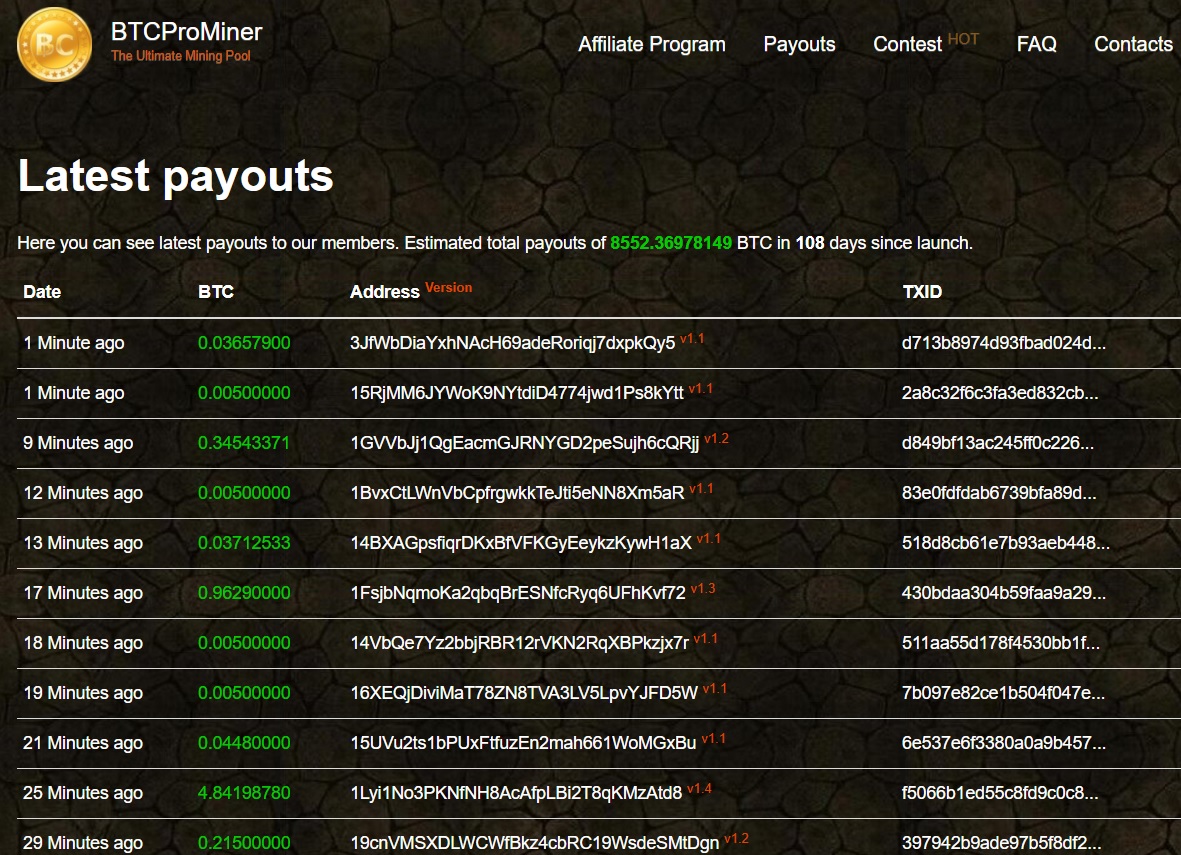 Certainly, for all its reach and popularity, bitcointalk.org failed to produce a single confirmed btcprominer.life user who actually picked up BTCs from the operation. The chatter on there is very negative about BTCProMiner, with most posters convinced that this is indeed a scam.

Several bitcointalk forum members have created accounts at BTCProMiner, but none of them got paid anything.

One of them reached the payout threshold of BTC 0.005 in about 8 days, after which he requested a withdrawal. He was then told to increase his IPV to secure access to instant withdrawals, or to wait 30 days for the manual processing of the withdrawal.

Others have chimed in, stating that instant withdrawals weren’t granted to those who had already upgraded their accounts, either.

Some even went as far as to wait out the 30 days allegedly required for manual processing – to no avail.

Reddit users haven’t really addressed the operation yet. There are a few promotional posts looking to get some BTC enthusiasts hooked, but no one has yet pulled the curtains back on the scam.

Well only just found your page about BTCprominer I love your review thanks for the heads up thought it was fishy when I wanted to upgrade with the balance accumulated 0.5 and didn’t want to pay saying I have 2 accounts on my IP I have been using for months and no auto payout. Never received anything and they have never replied to any of my messages, I have visited the address in London the owned of the site does not live there it is just an apartment the woman that does live there told me she has a postal block for the amount of hate mail she was receiving to that company this was last month.

Having read the above, no one should find it surprising that no registrant information is available on the btcprominer.life domain. These scammers are obviously ready to pack up shop at a moment’s notice and to move on when the time is right.

Taking advantage of the “affiliate program” they’re pushing, they’re getting people to refer their friends in the hopes of convincing some of their victims to “upgrade” and thus to hand them BTCs. btcprominer.life is the definition of a pyramid scheme.

According to Alexa.com, by the way, btcprominer.life is a highly popular website with a global rank of 15,919 at the time of writing.

A significant amount of this website’s visitors come from Brazil, India, Spain, Thailand and Venezuela.

If you have been scammed by BTC Pro Miner, please share your story with us by replying below.

To join our member list and receive additional scam warnings from us directly to your inbox, please subscribe to ScamBitcoin.com!